In this video you see a basic scale pattern of the pentatonic scale for G major. If you look at the tab it will be the second measure starting with the fourth string fretted at the fifth fret. This is a good pattern to learn because we are going to expand on this pattern in future lessons.

The pentatonic scale is also very, very versatile. Three V's. It is so versatile that it will sound good when played over its associated Major Chord or the Relative Minor!

Rock on the Moose! 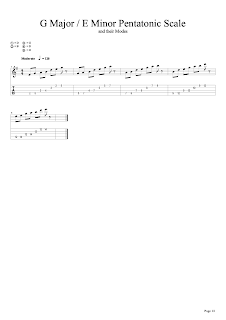